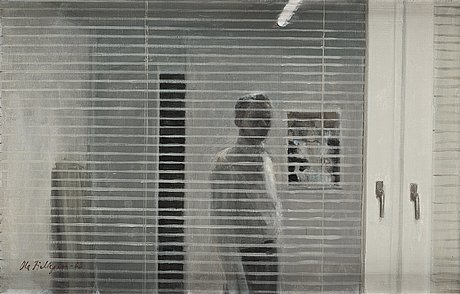 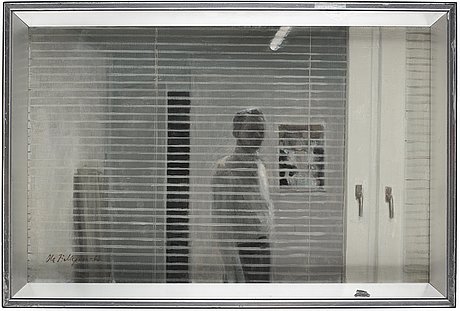 “You can’t get rid of the past that easily”. This was the start of a conversation between Lars Nittve and Douglas Feuk, which is quoted in the exhibition catalogue produced for Ola Billgren’s retrospective exhibition at Rooseum, Malmö and Moderna Museet, Stockholm in the summer and autumn of 1991. Ola Billgren’s work was hugely conscious of the past, both the private and the collective, at the same time as it was eager to re-examine the image of history in order to create pictures of contemporary time.

In the 1960s when non-figurative painting still dominated, Ola Billgren, driven by his interest in history, began to produce realistic and representational art. In Billgren’s paintings from the 1960s and 1970s the inspiration came from contemporary, urban life, from literature and from films, and from the illustrated press. He attracted much attention and went on to represent Sweden in a number of exhibitions, including the 1967 and the 1971 Paris Biennales (celebrating young artists) as well as at the Venice Biennale in 1976. In many of his paintings from the 1960s the viewer encounters what appears to be the artist’s intimate environment. He surrounds his figures with everyday items: clothes, furniture, newspapers, cigarette packets, beer bottles and china, thus revealing something of the place from which the paintings emerged. Everyday life plays a significant role in the work, ‘Spegling’, represented here. The person depicted in the painting stands in an apparently empty room, their reflection becoming visible in something as prosaic as the window blinds. The viewer discovers the details through the mirroring effect, adding an additional dimension that the viewer's gaze is filtered through. Look more closely and you will see a half-open wardrobe door, a lone poster on the wall and something else in the corner. Is someone moving in? Moving out? Ola Billgren suspends the viewer in a state of uncertainty, leaving it entirely up to you to tell the story.