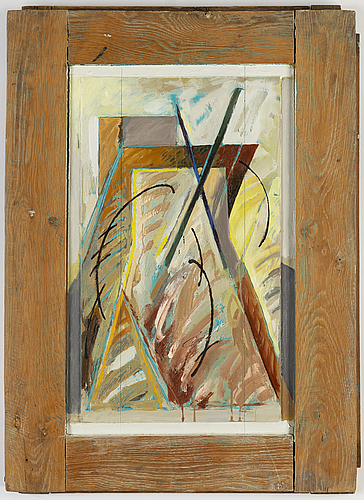 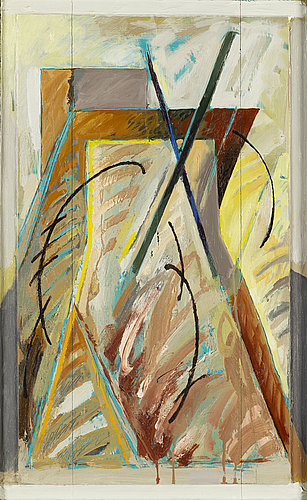 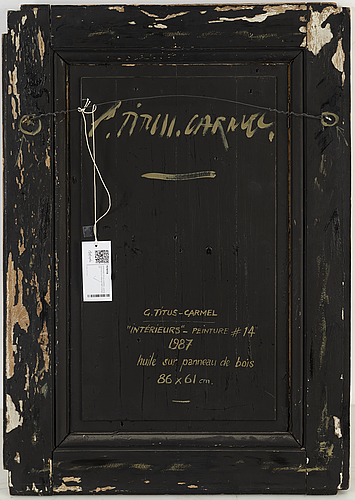 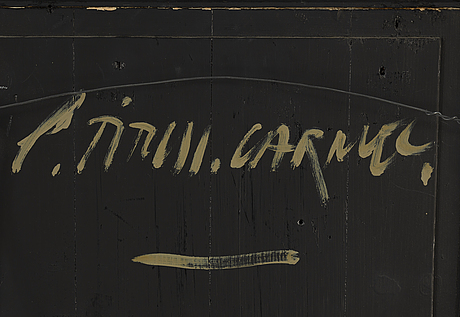 GERHARD TITUS-CARMEL, oil on panel, signed and dated 1987 on verso.

Items are available for collection after the end of the auction at Västberga allé 3.

Gérard Titus-Carmel, born in Paris on 10 October 1942, is a French Postwar & Contemporary artist, a painter as well as print-maker, poet and essayist. He has illustrated works of other poets and writers, and published thirty books of his own with essays on art and poetry. He has been the subject of seven films, including one produced by the Musée National d'Art Moderne, Centre Georges Pompidou and RTL Télévision, Luxembourg, and innumerable books, essays, exhibition catalogues, and reviews. His work is represented museums and public collections. The artist has also produced monumental work (Ministry of Finance in Paris, DRAC Champagne-Ardenne, the Palais des Congrès in Nantes, etc.).

Gerard Titus-Carmel works in an expressionist style. His pieces are marked by strong line and repetition of form. His early work is organized into suites and series, which, one after the other, form a long narrative of loss and absence. Then followed long sequences of drawings on forms of dislocation and rupture, deconstruction and splice, until the most recent series of drawings and paintings on landscape, clustered foliage, superpositions and the organization of shade and light.

Gérard Titus-Carmel lives and works in Oulchy-le-Château, in the Aisne. Titus-Carmel studied at the École Boulle in Paris from 1958 to 1962 and held his first solo exhibition in 1964. From these first exhibitions in the 60s, his paintings, drawings, lithographs and etchings revealed a passion for literature, echoed in the titles and dedications of his paintings.