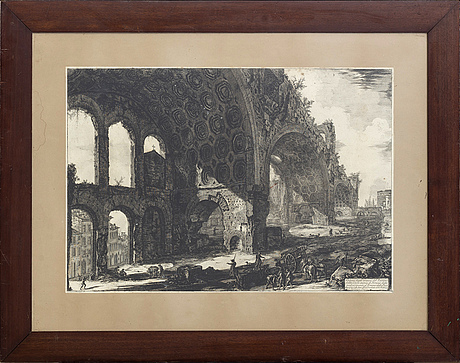 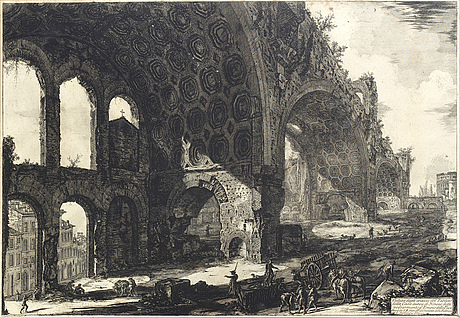 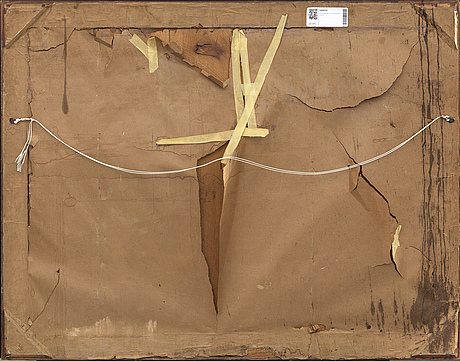 Not examined out of frame. Minor stains.

In 1777 Piranesi executed his last master works—15 exquisitely rendered drawings made of three ancient Greek temples in Paestum, outside Salerno in southern Italy, (Sir John Soane’s Museum, London). While Piranesi (1720–1778) is primarily known as the creator of such famous print series as the Vedute di Roma and especially the Carceri d’Invenzione, the Paestum drawings are Piranesi’s most extensive body of work devoted to a single topographical site.

Made in preparation for his Différentes Vues…de Pesto (Different Views of … Paestum) - a book finished by his son, Francesco, and published posthumously in 1778–79—the drawings depict views of the three great Doric temples in the former Greek colony of Poseidonia, which in the third century B.C. was conquered by the Romans and renamed Paestum (the temples were originally identified as the Basilica, the Temple of Poseidon and the Temple of Juno or Ceres, but are now determined to have been dedicated to Hera I, Hera II and Athena). Left abandoned and cut off by a swamp, Paestum’s ruins were rediscovered in 1746 thanks to the construction of a new road. They sparked intense interest among artists and architects including Piranesi, and the consequent drawings, prints, paintings and models of the temples revolutionized people’s understanding of early Greek Classical architecture in general and the Doric style in particular. Roman architecture, until this time deemed the style that architects should emulate, now seemed derivative.

In his series, Piranesi employs the scena per angolo, a drafting method developed by 18th-century Italian stage-set designers, which replaces a drawing’s traditional, one-point perspective with several diagonal axes, thereby allowing the artist to open up the three-dimensional space for greater dramatic effect. This method was especially useful in a setting like Paestum, where many spectacular vistas were visible through the temples’ colonnades. 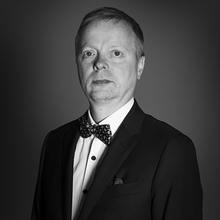