Helene Schjerfbeck (1862-1946), together with Edvard Munch and August Strindberg, are the most prominent representatives of Scandinavian art in international art history. Schjerfbeck's extraordinary talent was noticeable from the start, as shown in the painting "The Convalescent", for example, from 1888 (oil on canvas, 92 x 107 cm, Finnish National Gallery/Ateneum Art Museum), which gained a medal when it was exhibited at the Exposition Universelle of 1889 in Paris. It was Gösta Stenman who arranged for Schjerfbeck to exhibit her work in Stockholm on numerous occasions. Her 1937 exhibition became something of a breakthrough, demonstrating that Schjerfbeck had not only made a mark in select artistic circles but had also won the admiration of the general Swedish public. The daily Svenska Dagbladet’s distinguished art critic Gotthard Johansson wrote in his review of the exhibition: in front of Helene Schjerfbeck’s art the question of old or new is silenced, here you come face to face with great art, here is a sacred space.

In later years Schjerfbeck’s reputation has rapidly soared across the world and generated exhibitions, not only in Europe but also in Japan and Canada. Some major exhibitions of her work include the Venice Biennale of 1956, Prins Eugen’s Waldemarsudde in Stockholm in 1987-1988, Hamburger Kunsthalle in 2007-2008, as well as a 2015-2016 touring exhibition in Japan. Her work was also honoured with an extensive retrospective at the classic Royal Academy of Arts in London in 2019, which led to the British press calling her Finland’s Munch. 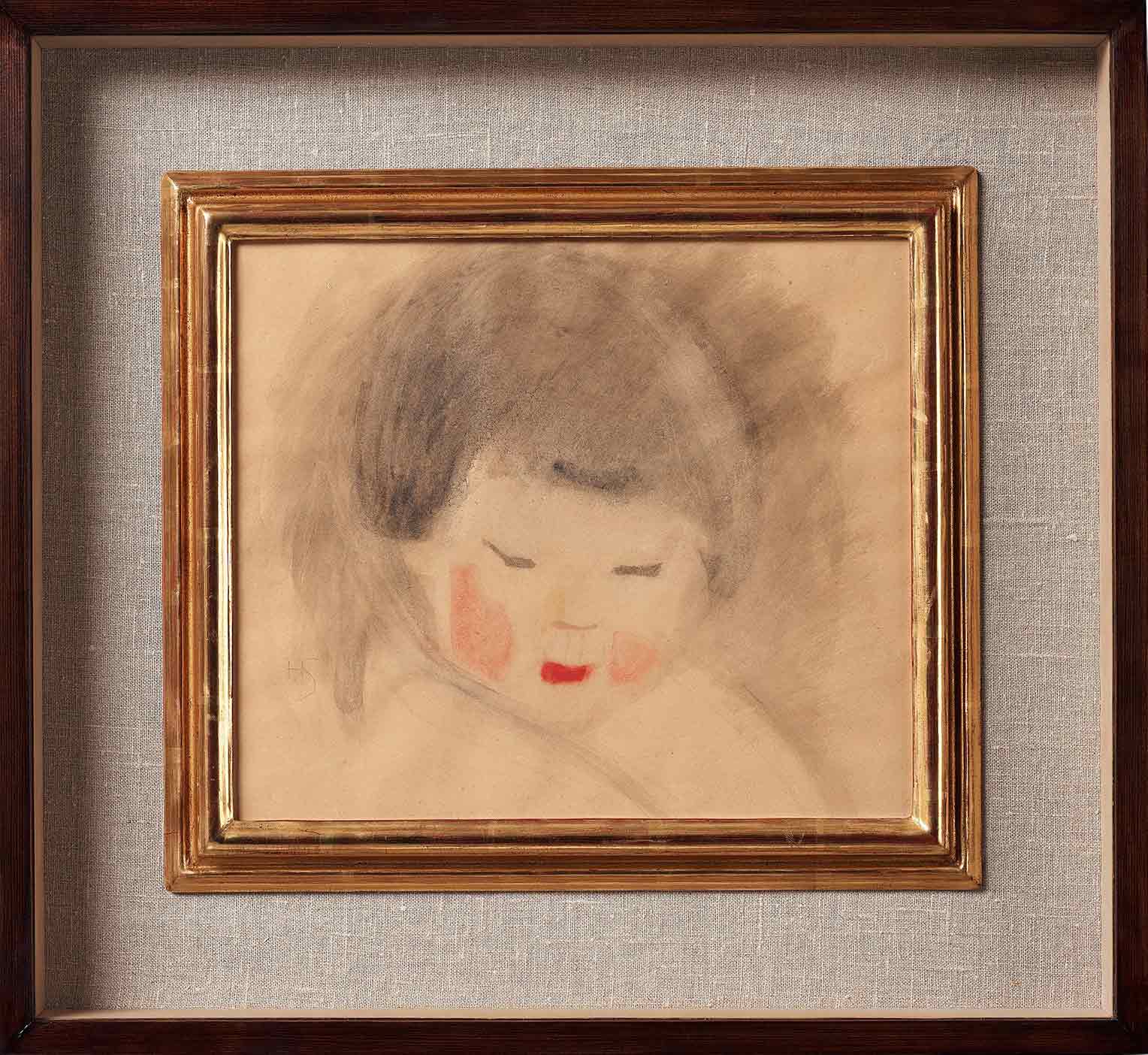 Helene Schjerfbeck had lived in Hyvinge, just north of Helsinki, for fifteen years when, in 1917, she executed the composition in the auction, Kinesiskt barn (Chinese Child). After a period of loneliness and near isolation the world began to once again slowly open up to Helene with the arrival in 1913 of Gösta Stenman, who had stepped off the train in Hyvinge in order to visit her. Stenman had come to buy paintings from Schjerfbeck and this strengthened both her confidence and her finances. During the subsequent years, Stenman brought, on his now recurring visits, illustrated art magazines and modern artworks by, for example, Tyko Sallinen and Juan Gris. Furthermore, Stenman’s luggage often contained heavy books on art, through which they conducted in-depth conversations about the development of contemporary art. The meetings with Stenman became a welcome influence on Schjerfbeck, and the artistic path she had chosen, alone during the first years of the 20th century, had now gained support and acknowledgement from someone in the know.

Since moving to Hyvinge Schjerfbeck had pursued her interest in the Middle Ages as well as studied Japanese schools of painting. It was there that she found the inspiration for the simplicity that imbued her artistic practice from the turn of the century onwards. Schjerfbeck wrote in a letter to a friend, artist Helena Westermark, how she strived for imperfection and flattened surfaces, but also an image of perfection.

Throughout her artistic practice, she was particularly interested in women or girls as her subjects. She studied the models carefully and attempted through the painting to capture their characters. As such Schjerfbeck’s depictions of women were more than basic portrayals and should rather be considered as studies of the subjects’ souls. Details in their dress or faces were dismissed in favour of moods and close attention to the light.

The child in Kinesiskt barn appears to have her eyes closed, or to be looking downwards. This is a recurring feature in Schjerfbeck’s painting. The model seems as if she is in her own private world, which gives the image its calm, almost meditative character. The girl is not to be disturbed, almost as if she exists in isolation. The composition is made up of soft, somewhat sweeping lines, complemented by the colours’ subtle tones. The subdued colour palette only accented by the red lips and the rosy cheeks. Evocative of the Japanese style, this lends the image a subtlety and elegance distinctive to Schjerfbeck’s work. Furthermore, it is as if Schjerfbeck repeatedly gives an image of herself in her portraits of others, an image of her existence where loneliness, stillness and calm rule and where the outside world is rarely called upon, as she closes her eyes.

In front of a subject such as this the words of Swedish art historian Lena Holgers come readily to mind: Helene Schjerfbeck is one of the most important artists of the early 20th century. She displayed extraordinary personal strength when it comes to taking her own artistic practice and her life in her hands. She continues to fascinate even in posterity. 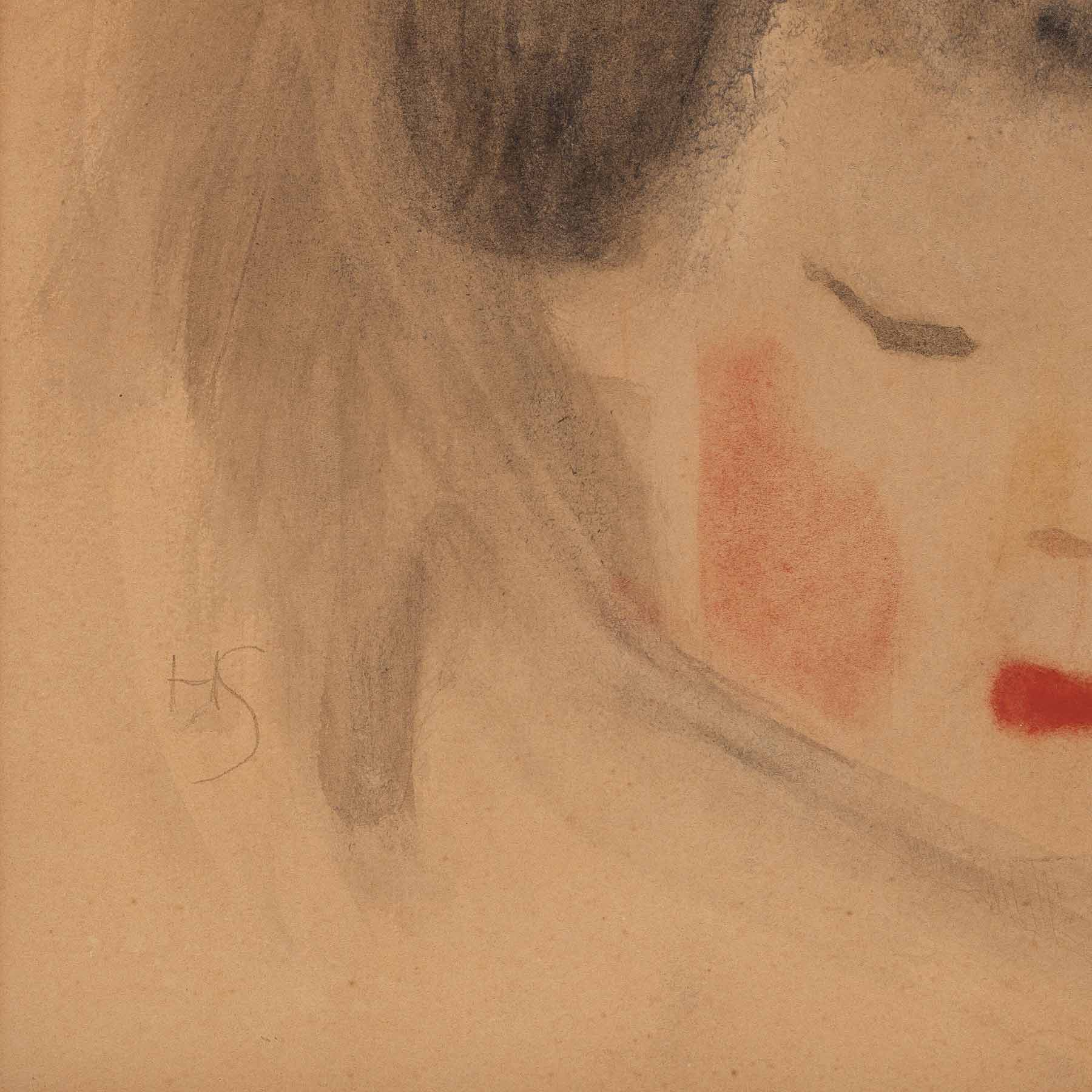 Additional work of Schjerfbeck in the auction

When is the viewing and auction?