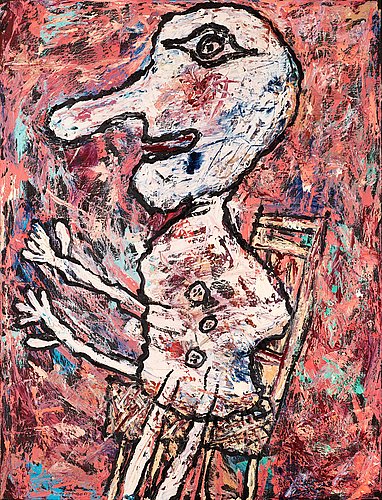 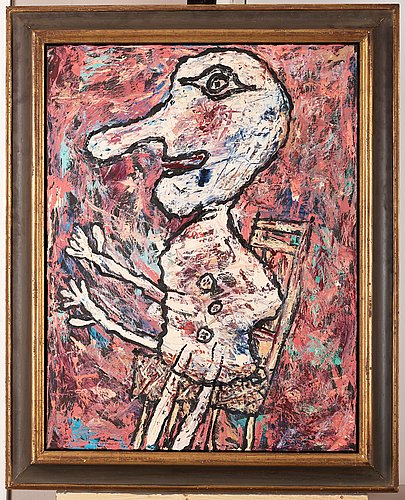 Buyers will be charged an import VAT of 12% in addition to the buyer's premium, on the hammer price.

"L'art s'adresse à l'esprit et non pas aux yeux" - "Art speaks to the soul, not to the eye". Although Jean Dubuffet often stated his conviction in these words, the viewer’s mind is captured immediately by the powerful and intense expressiveness of his work.
The diverse oeuvre of Dubuffet is a multifaceted protest against the accepted ideals of beauty and culture in Western art. He became fascinated by the creative expression of children and the mentally ill because they fail to conform to the etiquette of good taste. He referred to their work as "Art brut" and collected it with vigor, leaving a collection that still remains intact after his death in the “Collection de l’Art Brut” in Lausanne in Switzerland. His portraits were all inspired by these drawings and paintings, the eyes, nostrils and the dimpled chin is rudimentary, it is all about its expressiveness. With easy movements the artist gives his models broad grins from ear to ear. During the 1940s he often used unorthodox materials like asphalt, cement and sand that he scratched, scraped and scrubbed. In the 1950/60s he sometimes only used paint and sometimes he experimented with tree bark, banana skins and butterfly wings.

"Nez Long et Chaise Septembre" is painted during the important years in the beginning of the 1960s when he returned to the city life in Paris after residing several years in Vence in the South of France. The metropolis he encountered was very different from the Paris of his memories, coloured by the post-war period. The throbbing life in the capital had an immediate and profound effect on his art. The lights and movement returned to Dubuffet’s work and his interest in portraying people was also rekindled. His paintings force the viewer to accept other dimensions of what is considered as beauty in the society. "Nez Long et Chaise Septembre" shows clearly the direction which Dubuffet’s art took in the early 1960s while also manifesting his philosophy of art.